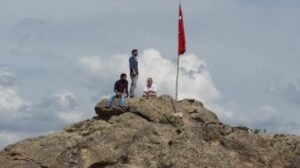 Patrick Fessenbecker, Bilkent University
Patrick’s work is a the intersection between philosophy and literature. He is currently working on a book Novels and Ideas, which makes use of the nineteenth century novel to explore issues and arguments in the philosophy of literature.

​Alan Coffee, King’s College, London.
Alan works on the philosophy of republicanism, with a particular emphasis on historical perspectives of women and slaves. He is currently working on two single authored books: Mary Wollstonecraft (Polity Press),  a monograph Freedom from the Perspective of a Slave, as well as a volume co-edited with Sandrine Berges and Eileen Hunt Botting The Wollstonecraftian Mind (Routledge).
Together with Sandrine Berges, he is the recipient of the Newton Mobility Grant funding this workshop.

Lucas Thorpe, Boğaziçi
Lucas’s main research interest is on Kant and other early modern philosophers’ ethics and political philosophy. But he is also working on contemporary logic and epistemology. He is the recipient of a Boğaziçi -Southampton Newton-Katip Çelebi project AF140071 “Agency and Autonomy: Kant and the Normative Foundations of Republican Self-Government” together with  Sasha Mudd (Southampton)

Roberta Wedge
Roberta is a Wollstonecraft expert and Spokesperson for the Mary on the Green project. She runs a blog collecting information about events and research on Wollstonecraft. You can listen to her on Woman’s Hour, discussing the project and Wollstonecraft’s life with radio host Jenni Murray and Barbara Taylor.

Zübeyde Karadağ Thorpe (Hacettepe)
​Zübeyde is a PhD student in Philosophy at Hacettepe. Her main research interests are in social, political and moral philosophy, especially with respect to Kant and Mill. She is currently writing a doctoral thesis on Hate Speech.

Sarah Hutton (York)​
Sarah is a pioneering researchers in the history of women’s philosophers. She is a specialist on seventeenth century philosophy and has written two monographs on the period, British Philosophy in the Seventeenth-Century and Anne Conway, a Woman Philosopher.

Özlem Duva (Dokuz Eylül)
Özlem is associate professor at Dokuz Eylül University in Izmir. She works on Philosophical Anthropology, Kant, Political Philosophy(ancient and modern) and Masculinity and Philosophy. She is on the editorial board of the journal Masculinities.

​Burcu Gürkan
Burcu has taught at various universities in Canada and Turkey. Her life has been punctuated by constant movement, sometimes inter-continentally and sometimes from room to room. A philosopher by trade, she specializes in feminist epistemology with a focus on Self/Other relations. She is currently finishing her dissertation on Self-Knowledge, Women and the Other at York University in Toronto, Canada.

Saniye Vatansever (Işık and Yeditepe)
Saniye works on Kant and Hume and more generally on early modern philosophy. She is the president of the recently funded Society for Women in Philosophy in Turkey.

Bensu Arican
Bensu is an MA student in Philosophy at Bilkent University. She is writing a dissertation on whether conscious emotions are natural kinds. She is the Media Officer for SWIP-TR.

Laura Brace (Leicester)
Laura works on the politics of slavery, old and new, with a particular focus on late 18th century abolition discourses. Her book, the Politics of Property looks at the links between current debates on slavery, gender and colonialism and eighteenth century texts.

Gözde Yıldırım (Boğaziçi)
Gözde is an MA student at Boğaziçi. Her  main areas of interests are social, political and moral philosophy, Kant and Hegel, and  German idealism in general and modern philosophy.

​Hatice Nur Erkızan (Muğla)
Hatice Nur works on Aristotle and Martha Nussbaum. She is the founding editor of the philosophy journal Arkhe Logos.

Gizem Kavas (Bilkent)
Gizem is an MA student in philosophy at Bilkent. ​

Sena Yalçın (Bilkent)
Sena is an MA student in Philosophy at Bilkent. She is writing a thesis on Epistemic Injustice and Identity Politics.

Zacharus Gudmunsen (Bilkent)
Zach  is an MA student in Philosophy at Bilkent. He is writing a dissertation on Non-Naturalism and Artificial Autonomous Moral Agents.